Posted on August 3, 2016 by williamrporter 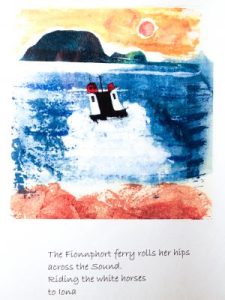 It’s been two years since I finished a sabbatical. And two years later I now find myself visiting Iona on pilgrimage, an idea which was seeded in me those months ago.

With our children on Christian camp and my wife taking a creative weekend craft workshop, I decided to clear the diary at the end of July for three days. I sped up the motorway to catch the Oban to Mull ferry. Once across, I tried to unwind as I took in the beautiful scenery along the country roads the length of Mull, parked the car and took the Fionnphort passenger ferry across the sound to Iona – the last one of the day.

I need to reflect on spiritual benefits the short retreat gave to me, but five things made an immediate impression:

Firstly, the sense that I was a pilgrim. A day’s journey, where I prayed on and off, helped me quickly move into a place of slowing down and stillness. I was coming to an island, completely off the beaten path of modern civilisation, but on a well trod path of other seekers and prayer-ers. Amongst families and organised tourist groups, I mingled with many others who, like me, were making their own spiritual journeys. We rubbed shoulders in the guest houses, on the ferry and in the prayer chapels, giving each other respect and space to be with God.

Secondly, the feeling that Iona was a holy place. Christian places of prayer, both ruined and current, engendered a spiritual atmosphere. I walked past many celtic crosses and read many stories of the early Celtic monks. Iona is iconic, one of a handful of ancient monastic centres in Britain, which was set apart for prayer, for reading and copying of scripture, and for a simple, serving lifestyle that brought glory to God for centuries. 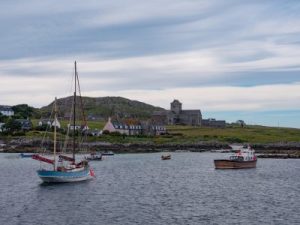 Thirdly, the evidence of a missionary spirit. St Columba and his companions made a monastic base on the island, so the stories tell, but the vibrant afterglow of the Christian missionary endeavour even 1,500 years later is hard to miss. Walking in the graveyard next to the abbey, I was moved by the evidence of holy lives laid down for Christ, of kings who were so influenced by these monks that they were brought in pomp to their final resting place, and of this being the serendipitous launching pad for the gospel to spread through Scotland and into England.

Fourthly, the realisation that it was an easy place to pray. I joined 150 other pilgrims for evening communion in the abbey, from all walks of life and faith. We sang by the mix of setting sun and candlelight and broke bread together simply and profoundly. On Iona, whether in a chapel, on a meandering path, or sat upon a beach, I found it a very conducive place to speak to and listen to God. The anticipation of a spiritually ‘fruitful’ time can sometimes lead to an anticlimax in the moment itself, but here encountering the Holy Spirit happened quite naturally and wonderfully.

Fifthly, the experience of a gentle wilderness. Crossing two islands, taking nothing more than hand luggage, and with no mobile signal anywhere, I felt as though I was leaving normal civilisation behind and coming to a different world. Even the isolation and simple ruggedness of the island carried with it the call of wild and an uncanny sense of God. Despite a small resident community living a fairly modern lifestyle, you can walk a short distance across grassland and sit ‘on the edge of the world’ gazing out on the vast Atlantic ocean.

All of this has been very helpful for me as I am on a spiritual ‘desert prayer journey’ this year. I hope there will be more to write on this in the coming months. What a privilege to be able to travel so freely on pilgrimage, something readily available yet something I rarely take the time to do. 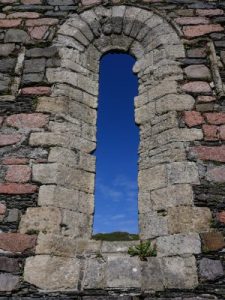 William is married with two children. He helps lead a house of prayer in the Midlands of the UK. William loves God and counts photography, music and walking as hobbies. Living life to the full amongst good friends and family are some of the precious gifts of his life.
View all posts by williamrporter →
This entry was posted in Desert and pilgrimage, Life observations and tagged desert, pilgrimage. Bookmark the permalink.

4 Responses to Brief pilgrimage to Iona